Have a look at some recent rescues by our team here at Enchanting Animals. Though it’s not possible to help every animal we find, we do our best to help as our time and resources allow.

Should you have an animal needing help or rescue, please contact us.

From Cowboy to Pirate

Though many rescue stories are tragic, that is not the case with “Scally”. Scally belonged to a couple for over 10 years, and was loved and cared for. His “mom” was a nurse who decided that being a traveling nurse offered opportunities she couldn’t pass up. His “dad” was retired and wanted to have the freedom to stay with his wife rather than having a permanent home location. As they made preparations for their life changes, they realized that they would no longer be able to provide Scally with a stable home.

Many parrot species can live as long as 80+ years. As a result of this, many outlive their owners by decades. Though we certainly understand the desire to have parrots as pets, we urge people to consider whether they have the desire and ability to care for an animal, potentially for the rest of their life. As well as make arrangements for its continued care should it outlive you. If you do feel that a parrot is the right pet for you, we encourage you to reach out to a rescue organization and offer a home to an adult bird in need of a new family.

Though people sometimes have concerns that a rescue may have “issues” or that it may come with undesirable learned behaviors, the opposite is generally true. Rescues are special and unique because you get to learn about who they are and what they know over time. I have worked with rescued dogs who unexpectedly reconnected with doggy friends they had known while they were in the puppy mill and were overjoyed to see an old friend. In Scally’s case, he has an interesting vocabulary that ranges from expected but nice things like “hello” and “hi” to the far less expected “yippee-a yippo-o and Giddyup”. Turns out our pirate had a cowboy side in his former life! We are so happy to be able to let him teach us about who he is, while offering him a lifetime of love and stability. 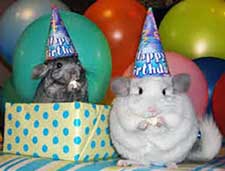 Schedule a Party or Event